In the last few decades, both China and India have been targeted by TNCs for FDI. Rapid and sustained economic growth have been experienced by both countries since 1990. They are referred as third phase NICs or RICs.

China is the world's most populous country with over 1.3 billion people. China now has the world's fastest growing economy and is going through what has been described as a second industrial revolution. The economy by GDP of China is the second largest in the world yet it is still classed as a developing country. Although China's economy overtook Japan in 2010, they are still behind Japan in science and technology, production level, and living standard, With per capita GDP at only US $12.8 thousand, China is among middle to low-income level countries, ranking 89th place in the world (International Monetary Fund 2014).  82 million people in China live below the poverty line according to the UN standard, living on less than US $1 a day. China ranks 91st in the HDI with 0.719.
In 1978, the Chinese leadership began moving from a centrally planned economy to a more market-orientated system. Led by president Mao's successor, Deng Xiaoping, the Chinese sought to bring to an end the relative economic isolation of the country by encouraging foreign investment that would lead to huge increases in exports, as had been the case in other east Asian countries.
As of 2015 China's economic growth has been said to be slowing down. This is due to; China's working age population peaking in 2012, investments have topped out and China’s technological gap with rich countries is narrower than in the past, implying that productivity growth will be lower. Although, China's economy is predicted to continue to grow in the future.

India is the second most populous country in the world with over 1.2 billion people. It is the seventh largest country in terms of area. India's economy is within the world's top 10 in terms of GDP, however GDP per capita is US $5,855 ranking 125th (International Monetary Fund 2014). Although India is classed as a NIC some say that India is an 'ever' developing country. This is due to the huge inequality within the country. There are still huge gaps between the rich and the poor as well as gender inequality, preventing many women in India to be educated and employed. The HDI of India is 135th with 0.586 just within the medium human development category. 179.6 million people lived in poverty in 2011 (World Bank 2014).
Unlike the other emerging Asian economies, recent transformations in the Indian economy have been based more on the service sector than on the manufacturing growht which has occured in the previous NICS. The service sector in India has been the main engine of economic growth. The service sector now contributes for over 55% of India's GDP as shown in the figure below. 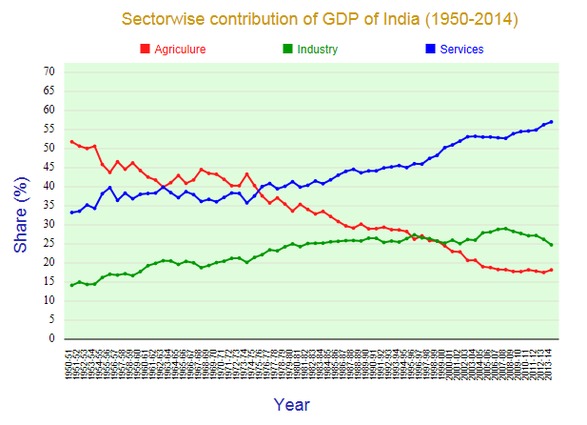 India's main advantage lies in the number of highly skilled and qualified professionals in its workforce whose skills are in demand in many areas across the English-speaking world. English is the third largest language by the number of native speakers and the most commonly spoken language in terms of native and non-native speaker. This has lead to a great deal of outsourcing of work from developed countries especially those that operate in software and IT services.
As well as ICT, India has become a world leader as IT-enabled sectors or 'back office functions'. Indian firms operate for companies in countries like the UK where they; operate call centres to deal with sales and customer enquiries, deal with accounts, undertake data entry and conversion such as medical and legal transcription and provide knowledge services which require specialists using database to solve customer problems.
Click home to go back to the homepage.
HOME