A transnational corporation (TNC) or a multinational corporation is a company that operates in at least two countries. Globalisation has allowed many businesses to set up or buy operations in other countries. TNCs invests in other countries by buying factories or shops, this is called inward investment. The headquarters and research and development (R&D) departments are often located in the country of origin, the home country, while the production tend to be overseas. However, as the company grows and become global, regional headquarters and regional R&D will develop in the manufacturing areas. Many TNCs are companies from developed countries such as the US and the UK. They coordinate and control economic activities in different countries and develop trade within and between units of the same corporation in different countries.
The table below shows the world's  top ten largest non-financial TNCs by foreign assets as of 2013 (United Nations Conference on Trade and Development UNCTAD).

Developing countries, NICs and RICs are heavily influenced by TNCs and globalisation. To find out more about their influences on the development of countries click on 'The Asian Tigers' or 'China & India' for case studies.

McDonald's is an example of a typical TNC in the service operation (tertiary sector). It is the world's largest chain of hamburger fast-food restaurants. There are over 35,000 outlets in 119 different countries across the globe. Its headquarter is located in the US where the company was originally founded in 1940 as a barbecue restaurant by Richard and Maurice McDonald. In 1950s with businessman Ray Kroc joining the company, the brother's small idea turned into a huge franchise now known as the McDonald's Corporation.
The figure below shows the map of countries with McDonald's restaurants, with the year of their first restaurants opening. 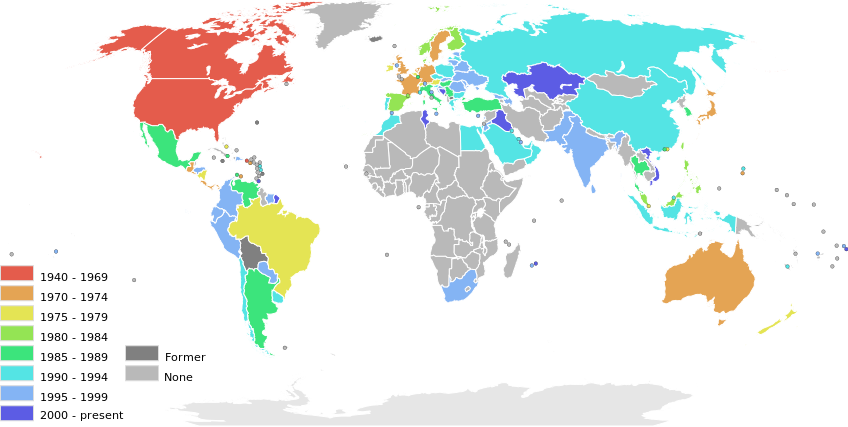 McDonald's is the world's second largest private employer and in 2014 the company had an annual revenue of $27.4 billion. To cater for different cultures in different countries, local specialisation is used. Different types of burgers and menus are available in different countries. Whether it's the structure/ interior of the outlets, the types of meat they use or by using the local products, McDonald's are successfully selling their food to people of different cultures. Even their most famous 'Big Mac' is a geographically localised product. Although the product may look the same, there are differences in energy intake, fat content, protein content, serving weight and etc. The Big Mac is also often used as a symbol for American capitalism and interestingly The Economist has used the price of the Big Mac in different countries as reference point for comparing the cost of living in different countries. This is called the 'Big Mac Index' (available by clicking here). Currently, Switzerland is the most expensive and Venezuela the cheapest.
TNCs can exploit resources, services and workers in less developed countries compared to their home country this can cause both positive and negative effects all over the world. Click next to find out more about the pros and cons of globalisation and TNCs or back to go back to the globalisation section.